Due to the recent Russian ammo ban I wanted to be prepared. I bought, "Berry's Superior Plated Bullets 7.62 x 39mm 123gr Spire Point Box of 1000". They are price nicely and shipped fast. I will be ordering more...

You have an excellent inventory of spare parts. Add to that Fair prices, quick delivery and Great service. You can't ask for more. Thank you FS Reloading ! Will certainly buy here again...

Good folks - good service - fast turn around! No complaints - You can trust them!.. 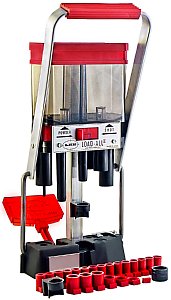 There is a bewildering variety of shot shell reloaders available on the market today with an equally wide range of prices. Some of these machines are wondrous devices to watch in action. However, they also sport wondrous prices with many of them over $1,000 each. Such price levels are not justified for most scatter-gun shooters. We have found a more modest machine is a better match for the way most of us shoot. To meet this need, FS Reloading is pleased to offer the LOAD-ALL II from Lee Precision (shown in the image at right).

Twenty-four shot and powder bushings are included free. The bushings alone can cost several dollars each from other manufacturers and they're not as accurate as those made by Lee Precision. Only Lee Precision supplies molded bushings.

The Load-All II is a time proven tool with hundreds of thousands in use world-wide. In over forty years, we have yet to see one worn out.